Well the good news is that Earth Overshoot Day arrived later this year on August the 22nd than it did in 2019 (July the 29th). The bad news is that this is due to COVID, not because of concerted effort on part of the dominant economic paradigm. Earth Overshoot Day is always a sobering, soul-searching time for host Michael Bayliss, so what better way to go about it than to soul-search with one of the most thoughtful and articulate environmentalist and authors of our time, Derrick Jensen?

You may remember Derrick Jensen from such best-selling books as Endgame and The Culture of Make Believe. Or you may be aware of him as the co-founder of Deep Green Resistance radical environmental group. Derrick is hailed as the philosopher poet of the ecological movement. He pulls no punches when it comes to being a champion of the natural world, pointing the finger of scrutiny at the modern human capitalist experiment and reminding us that yes, limits to growth are DEFINITELY real. In other words, he fits in just perfectly with Post-Growth Australia Podcast (PGAP).

I can't say we keep things shallow during the interview. Derrick goes down the rabbit hole with me as he dissects capitalism, the psychology that creates an expansionist, destructive mind-set, the trauma that is inflicted on both human and human animals as a result of a civilization built around competition and domination and, not least, the role that (non patriarchal/monotheist) spirituality plays in reconnecting us back into the awe and one-ness with nature. Although the interview is slightly longer than some other episodes, I feel I barely brushed the surface with Derrick and can't wait to have him back for 'round two pithy conversation’ soon!

Before the interview host Michael Bayliss provides a ruefully amusing anecdote of trying to explain Earth Overshoot Day to the mainstream news media last year. I honestly thought I was buttering up our predicament for the interviewers in the best way that I could, but they still felt I was being too pessimistic when I tried to explain that the work to be done involved more than just recycling. I had almost forgotten the cognitive blind spot that is mainstream news! 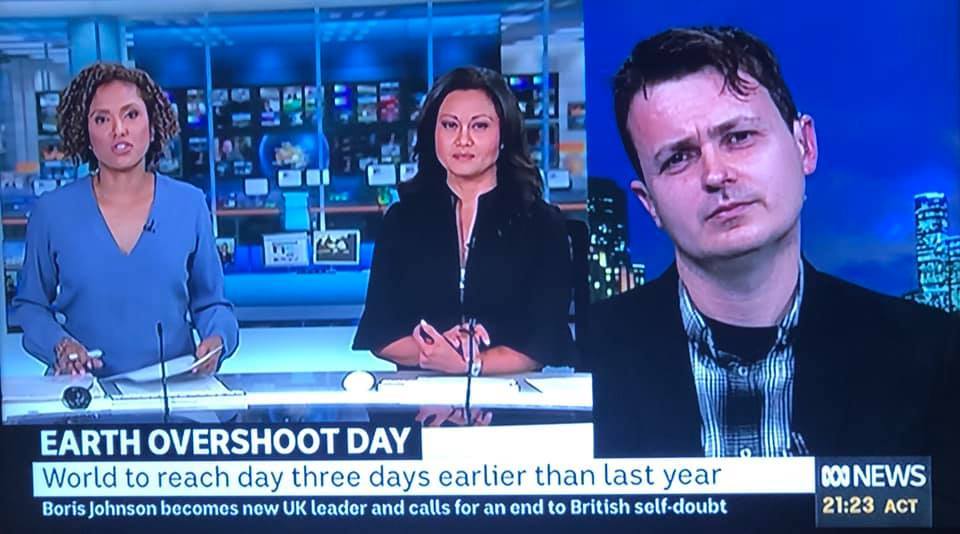 To cap it off, we play the brand new track ‘Ice’ from 'Counting Backwards' . It is a track about modern life malaise in the suburbs. Take this lyric below which links in nicely to some of the conversation had with Derrick Jensen:

"People don’t know how to be happy in the sprawl. It's a monochrome world she says. Flanked by urban malls."

Stick around for episode six when I interview Robert Wanalo from Post Growth Institute. In the meantime, you may be interested in the Earth Overshoot Day media release freshly released by Sustainable Population Australia (SPA).